About two years ago when I decided to 'get into' miniatures I looked for a house to copy and came upon the home of the Interior designer Nicky Haslam who lives in a beautiful Gothic Style 'Folly' house in England. The house was once also the home to John Fowler the mythical English interior designer of 'Colefax and Fowler' fame. The house now belongs to the National Trust and Nicky is a tenant. I have his book called Folly de Grandeur by Simon Upton edited by Jacqui Small LLP. 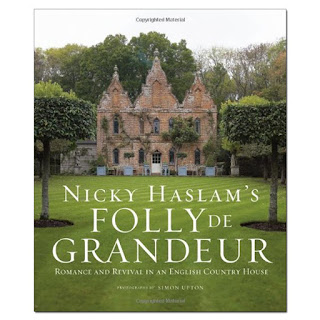 You could say that I chose a difficult house to copy but at the time being a pure novice the difficulty didn't hit me. I merely saw a house I liked and an interior that I could 'live' with. I sketched out the plans, calculated all the sizes from photos, bought wood and a LOT of egg boxes and glue and some blades and began. I had very little in the way of materials and most of the techniques were still beyond me. I spent over a year scaling down furniture and textiles and trying my hand at imitation. Then Life got in the way with first my little brother falling ill and then leaving us and a month later my dog and all this just after the death of one of my best friends. I began to take care of my mother and my surviving dogs and a little of me.
A dollhouse just didn't seem a priority so I put it all on hold. 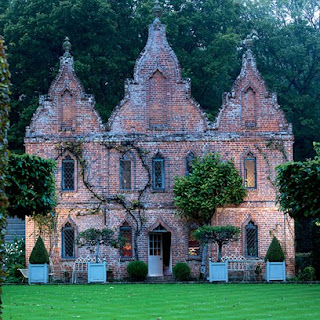 To get onto a cheerier topic here is one of the pieces of furniture in Nicky's house. It's a gothic style cupboard on legs that sits in his dining room and holds china and glasses. I needed a few key pieces to make my re creation work and this was the one I started with. As the fretwork didn't stand up to my techniques I found a wonderful couple on Etsy who specialise in laser cut fret work and I asked them if they could copy these panels. Their company is Puffin Design Crabpot  on Etsy and they make furniture and kits and dollhouses. They are easy to work with and enthousiatic about commisions so if anyone out there needs something done in this line don't hesitate. 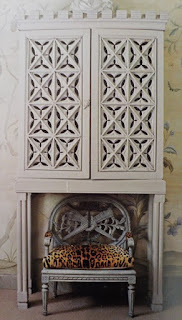 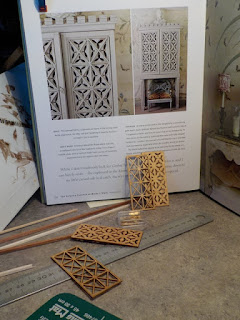 Here is one of the sketches I sent them and as you can see I Don't had any special software ! 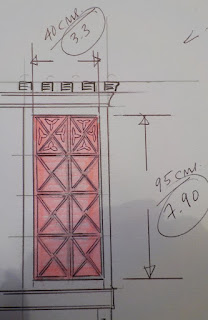 They worked out the panels into two layers which was a great idea, giving depth to the fretwork. 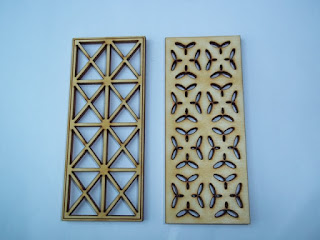 Here you can see already how it will look when finished. 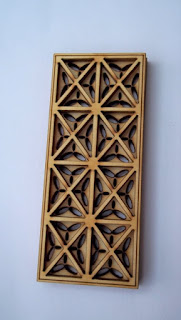 Assembly with little more than a few pieces of wood and some mahogany strips. I was really poor in stock and back then had no idea yet where to find materials! 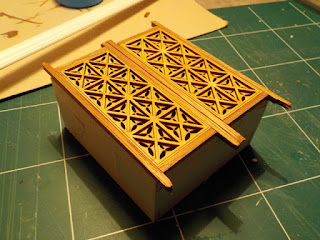 I made the castelations from an old picture frame, here squaring up the glueing with a scrap of wood. 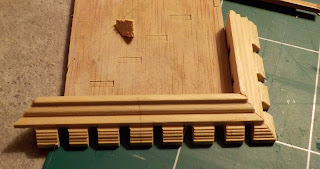 The base from scraps and popscicle sticks. I amateurishly carved the legs ! It's all a learning curve. 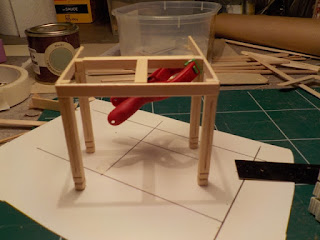 Assembly in progress, I had to imagine the interior. The exterior was painted as near as I could manage to his original. the inside in F&B green. 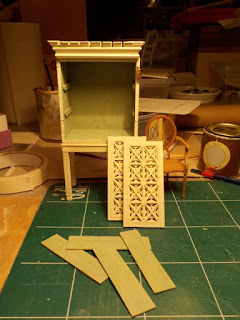 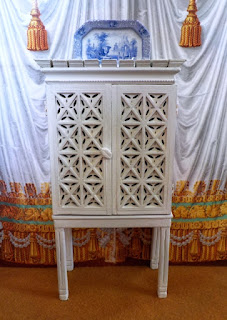 Above and below the finished cupboard. It is the sort of piece that in reality has been painted over many times and I tried to imitate this finish. I filled it with what I had at the time and photographed it against an open book of wallpaper. 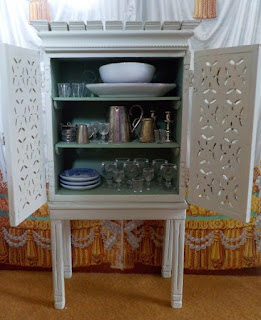