Before I begin this post I would like to send my wishes to all of you who are stuck here and there, I hope, making the best of things, miniaturising or house organising or gardening. It is important to turn events and situation like this to our favour and see it as a forced holiday.

As I have said in my previous posts I am in the middle of moving, the story is getting old I fear ! After a failed attempt last year which luckilly I didn't accept as the house that was is stuck in limbo and I would have been stuck with it. My new move is to a lovely region further South in France, in a small town with a train station and all the usual stores but without 'buildings' and industry.
Ten minutes walk along a country lane I have a supermarket, a DIY store and a garden center, what more can anyone want. Two minutes away there is a bank, a post office, a baker and a twice weekly fruit and veg market.
It is quite a large house but smaller than my present one, it has 6 bedrooms, a Library and dining room, an internal courtyard and a garden.
Because of the confinement I have not been able to go see in person so I have agreed simply on photos taken most kindly by my lovely estate agent. This is the first time the family has put it up for rent so it has retained all it's charm.This is a rental as years ago I decided not to buy but rent and not have that pressure.
Many cannot understand this I know.

Now down to archeology! The other day, fed up with packing and sorting I looked at an old screen that stood in a corner and decided to begin to restore it. It belonged to my father in law and was in his Napoleonic bedroom next to his huge mahogany and bronze bed complete with red and gold hangings. It was not a nice room and when he passed we only took the screen, leaving the furniture to my partners brother. My father in law was called the Baron Migineac de Villedieu, a rather grand family name for a quite ordinary man. That said he knew all the famous French writers and painters as the family spent every summer in St Tropez in the 50's and 60's when it was a seaside town and not a snobbish resort.

What I thought was going to take me an hour took all day ! It was in a terrible state. I wanted to take off the lovely antique 'Empire' toile de Jouy and put it back once the screen was consolidated.
I didn't take a before photo of the full screen but here is one half done.
At one point my ex took a staple gun to the back of the screen with some shantung silk and made a horrible job of it before giving it to me after we separated. We are still the best of friends. 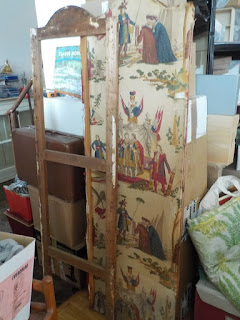 The 'toile' is lovely, all hand blocked, dating from the early 19th century.
I will have to find some way of cleaning it as I'm not sure that it will stand up to washing. 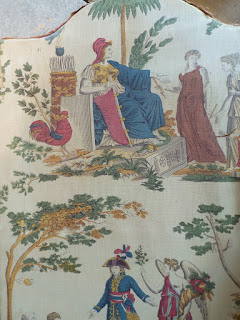 Here I cut the screen in two as there were fabric hinges and layer upon layer of fabric. 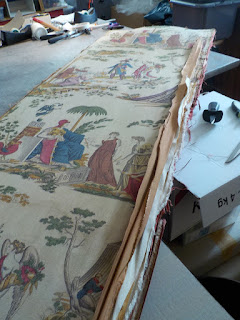 As I began to look deeper this was the story! 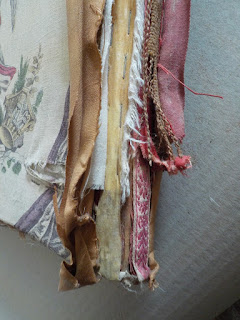 A terrible repair. Screens are hollow so fragile and easily damaged. 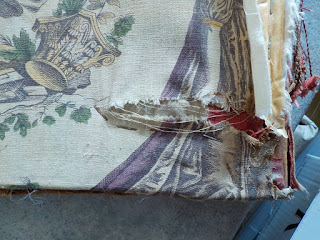 Here are traces of an old backing fabric from the same period as the toile de Jouy. 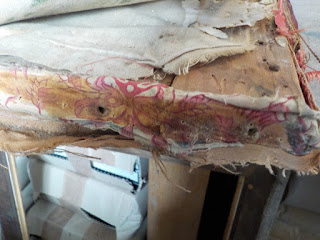 Here was a huge surprise, Under the toile was this antique wallpaper from the Zuber wallpaper company. Zuber began in 1797 and are still going today and are considered the Rolls Royce of wall papers, certainly not within my reach financially. Only the top part survived. It had been glued onto fine linen. 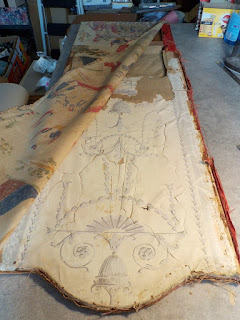 Strangely there were two identical layers of the paper, perfectly placed on top of each other. 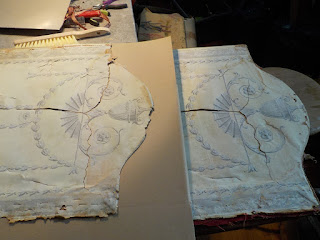 A detail of the paper. 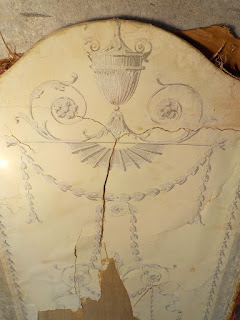 Here are the references of the design, I have contacted Zuber and asked them for details of the pattern and date to get an idea of when it was put on the screen. 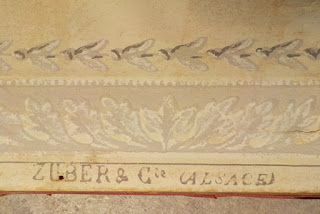 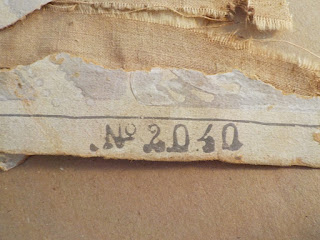 This is what I managed to save and I will frame it as I have quite a few scraps of antique wallpaper that will make a lovely visual patchwork on one of my walls of which there are many. 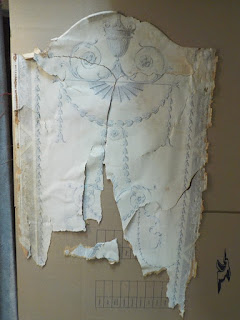 Here are some of the edge trimmings, there was also  a fifth one, very pretty, probably the original one. 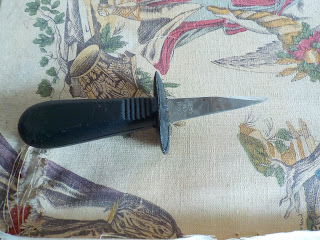 I am ending on a teaser, showing photos of a house that I have never seen ! It has wood panelling and stone floors and lots of fireplaces. The owners are having the house painted at the moment and I am moving in mid June. I will take some photos when I do move in as there are many other rooms. Living in a town with a station means that friends can come and stay so very happy am I!

Wishing you health and peace wherever you are and thank you for reading. 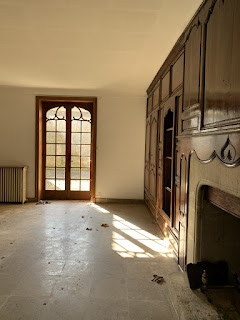 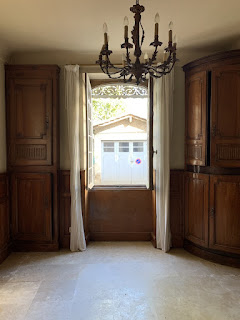 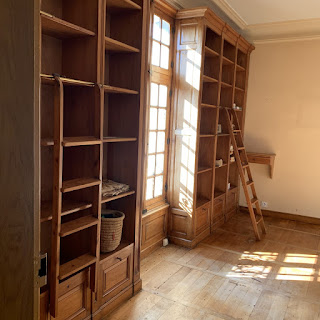 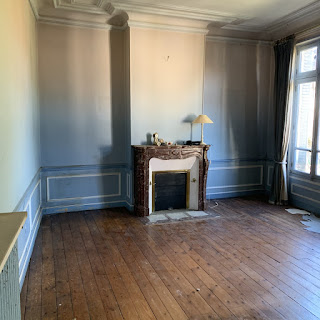 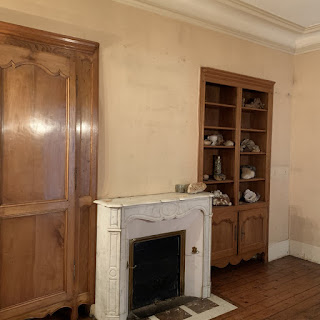