As I am in the middle of sorting out the house for the future move I am frustrated to not be doing 'something' creatif with my hands. Many years ago I saw a tapestry covered brick in an old manor house used as a door stop. The Tapestry used was of course a piece of antique textile in keeping with the house. There were some bricks left from building the kitchen sink base so I first covered it with cardboard and tape to stop the dust then a layer of batting. I used an old bed quilt for the padding and then chose a vintage tapestry. The one I chose has a funny side story, I used to love these slightly kitsch pictures and often bought them to take out of the frame, wash and make pillows with. This particular one I had bid on via eBay but lost out and then next day when walking the dogs I found one, beautifuly framed just propped up in the street ! The SAME one, I could hardly believe it.
My tastes have since evolved and I have more than enough Tapestry pillows but there is still a stock of these pictures in the attic. It was either cut it up and have the memory of the find or give it to local charity. 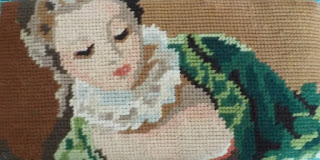 The picture was quite big but I decided to go 18th century kitsch and focus on the face. I think that this Tapestry was inspired by 'Boucher' painting. 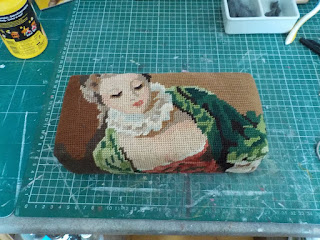 I had thought of doing a plain felt base but changed to total Tapestry. 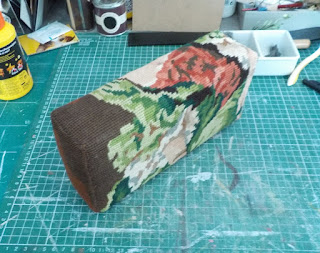 Here is place and ready for it's new home next year. 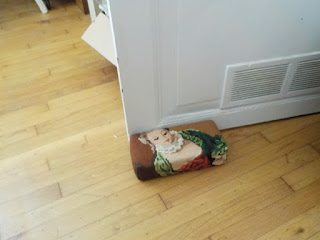 I have since seen some with specially designed tapestries but the fun is in recycling, maybe this will inspire someone to do the same, even make them to sell at a fair. It was a fun quick project and one day I will probably do another , or two or three. I am a bit obsessive when I take to making things.
I actually found in storage 12 Tapestry pillows and a rug that I made in the 80's and 90's then a friend sent me a link to some amazing old bobble edged ones she saw on Etsy and a month later she sent them to me! They say that you can never have enough of a good thing but believe me you can!